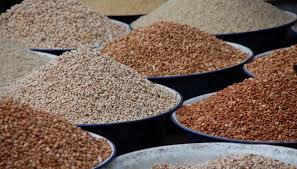 THE Director-General of Nigerian Agricultural Quarantine Service (NAQS), Dr Vincent Isegbe has expressed confidence that the European Union (EU) would lift the ban on importation of Nigerian beans (Cowpea) into the European market in no distant time.

The EU had banned the importation of dried beans from Nigeria in June 2015 on the ground that the produce contains a high level of pesticide considered dangerous to human health.

Meanwhile, a scientist, Dr Rose Gidado said the issue of excessive use of chemicals on beans could be avoided.

Dr Isegbe while speaking with Tribune Online, said all necessary things have been done, and soon their final report would be submitted to the European Union for consideration.

According to him “the official extension was supposed to be till 30th of June, and we too have done our own part by trying to make representations, but we have some major challenges, the EU asked for import control. So those are the issues we have been trying to put in place and we have addressed the issue already to government.

“The government is working hard to ensure that the issue is addressed very quickly, we are almost through, once that is done NAQS will now submit the report.”

He said efforts have been made by the government and relevant stakeholders to ensure that this issue was resolved, which he said that EU had noted.

“I am sure the EU has noted the tremendous effort we have made in terms of sensitisation, the laboratory result which we are going to submit to them have shown that the rates (chemical use) are declining in the field.

“In the next three weeks, we should be able to have concrete information on the EU ban on our beans because we would have done our submission and probably would have heard from them.

“As it is now, we are still interacting, and we believe that when they (EU) look at our submission, they would be able to officially lift the ban,” Dr Isegbe said.

Dr Rose Gidado in her submission said that Genetically Modified Cowpea could end the use of chemical pesticide which according to her is very harmful to the environment, plants and friendly insects and pests.

She also said that the use of chemical pesticides is not cost-effective, as farmers would spend more to get a good yield, which would, in turn, cause high cost of beans in the market.

“There is a problem with the use of chemicals, the number of time to spray is much, there is labour intensiveness and the cost attached to the chemicals is money. So cost-effectiveness is not there and all these add up to high production cost to the farmer. If the farmer had to spend a lot to have a high yield, he will have to recoup his money and ultimately, the cost of production goes higher.

“Other factors like the chemical spray, there is a problem with the chemical spray apart from the health hazard, because as you are spraying, everything is going into your lungs through inhaling,” Dr Gidado said.