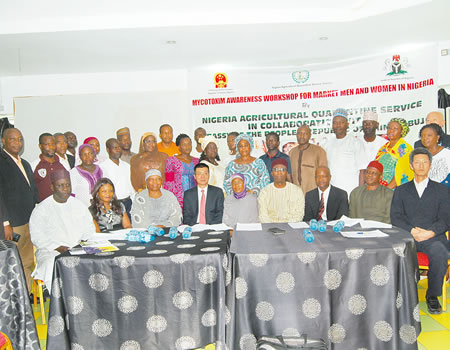 THE Nigeria Agricultural Quarantine Service (NAQS) in collaboration with the Embassy of the Peoples’ Republic of China organized Awareness Creation workshop for market men and women on mycotoxin contamination in Agricultural and Food Commodities in Kano, Benue and the FCT.

The objectives of the workshop was to enlighten farmers on the occurrence and prevalence of mycotoxins in agricultural and food commodities, health and economic impacts of exposure to mycotoxin, and prevention of mycotoxin contamination in food and feed stuffs and environment.

Addressing the participants, the Permanent Secretary Ministry of Agriculture and Rural Development, Bukar Hassan emphasized the role of agriculture and food commodities in the economic and industrial growth and the well-being of citizens.

He stressed the need for critical attention to be given to any issue that has negative impact on agriculture, food and health, such as mycotoxin contamination in agriculture and food value chains.

The Permanent Secretary who was represented by the Coordinating Director of NAQ, Dr Vincent Isegbe, added that mycotoxins have negative impact on the health of consumers which include all the market men and women and other actors in food value chain.

In his address, the Ambassador of China to Nigeria, Dr Zhou Pingjian, who was represented by Mr. Lin Jing, stated that food security was not only about sustained supply of food for people, but also guaranteeing nutritious and safe food for the people.

“In view of this, the Embassy of the People’s Republic of China was pleased to collaborate with Nigeria Agricultural Quarantine Service to educate stakeholders and raise awareness on mycotoxin contamination in Agricultural and food commodities”, he added.