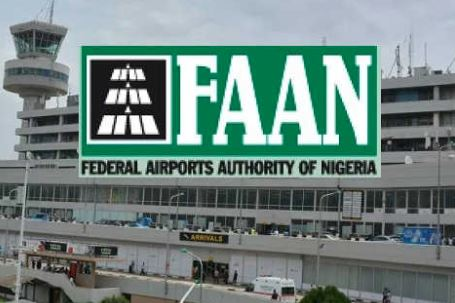 Th e Nigeria Agricultural Quarantine Service (NAQS) has raised alarm over the Federal Airport Authority of Nigeria’s (FAAN) poor implementation of the federal government’s executive order on the promotion of transparency and ease of doing business in the country. NAQS, Coordinating Director, Dr. Vincent Isegbe, said FAAN’s decision to forcefully remove NAQS offi cial from their post at the departure and arrival terminals is detrimental to the zero reject programme of the federal government on exportation of agricultural products. According to him, the enforcement of FAAN directive was skewed against the NAQS stressing that barely 12 hours after dislodging the service from those sensitive positions, several Saudi Arabia- bound luggage containing kolanuts were intercepted at the Nnamdi Azikwe International Airport.

“Kolanut is a banned commodity in the Kingdom of Saudi Arabia, but this was already cleared and passed at the departure point because NAQS was not there. It was intercepted by chance by NAQS offi cers at the back end of the departure. “Th is would have been a national embarrassment had those items reached Saudi Arabia, asides heralding a possible cycle of rejections and band for Nigeria agricultural products.

“Several cases like these abound even more at the arrival terminal. And the fact that they can and do also come in portable consignments increases the odds of a mishap. It doesn’t take a ton of grain to cause another tuta absoluta devastation in Nigeria. “Th at is why unscrupulous business persons and those deliberately seeking to destroy the nation can cash in on this lacuna to wreak havoc on the nation’s agro economy,” he said.

He called for the modifi cation of the memo as it concerns NAQS saying this is antithesis to the executive order as paragraph 20 of the order which directs single interface for MDAs does not mean confi nement of NAQS offi cials to the cargo terminal. He said only a trained quarantine personnel can properly inspect an agro-produce for export or import, not aviation security offi cials as is the case now adding that the practice is against international best practices. “Ordinarily, one would out rightly dismiss an undated, unsigned document purported to have been issued by a government agency, given that government businesses have well known procedures and protocol, the least of which is that documents are signed and dated for authenticity and traceability. “Th at the said notice was not signed by any authority in FAAN would not have been relevant but for the harassment and intimidation now being faced by NAQS offi cers in its wake and the reference being made to it.