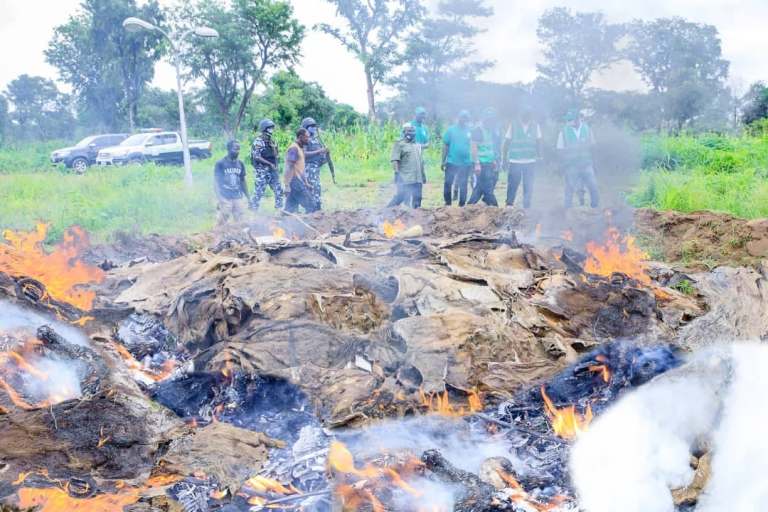 In continuation of its efforts to beat back the illicit exploitation of donkeys in the country and stimulate the sustainable prosperity of donkey skin, the Nigeria Agricultural Quarantine Service (NAQS), in Abuja, destroyed 1,500 pieces of outbound donkey skin worth N67 million.

The agency said it wants the consideration of the health and welfare of the endangered species to complement and support the viability of the donkey value chain now and in the future.

NAQS impounded the cache of donkey skin during several rounds of raids on hideouts used to store donkey skin ready to be trafficked out of Nigeria.
Addressing journalists, the Director of Operations, NAQS, Assistant Comptroller General of Quarantine, Dr. Sunday Audu said the agency has ramped up its intelligence gathering and surveillance of late because the individuals behind the unabated onslaught on donkeys in Nigeria have escalated their aggression.

The material value of donkey skin is on the rise because it is becoming difficult to source. That has become an incentive for the dealers in this contraband product to go all out against live donkeys.

Dr Audu stressed that NAQS was not opposed to trading in donkey skin but that the agency was against the ceaseless exploitation of donkeys without restocking a practice that, if not checked, would drive the endangered species to extinction.

He regretted that stakeholders in the donkey value chain were yet to coalesce around the blueprint laid out by the agency that prioritizes the health and welfare of the animals and the reduction of the impact of population threats on their existence.
He mentioned that trading in donkey skin must be based on a set of rules that has sustainability as its centrepiece.

Dr Audu pointed out that “exploiting the donkeys without a long term view is like killing the goose that lays the golden egg. It will decimate the donkeys which yield the skin and close the donkey business permanently.”

The NAQS official explained that the principled stance of NAQS is that the conservation and management of Nigerian donkeys and the exploitation of donkeys as a business need not be a zero-sum game.

He renewed the agency’s call for stakeholders to stop colluding with bounty hunters from Asia and enabling the wanton depopulation of Nigerian donkeys.

He, however, invited dealers in the commodity to seek guidance from NAQS on how to do the business and create value without running afoul of the law.