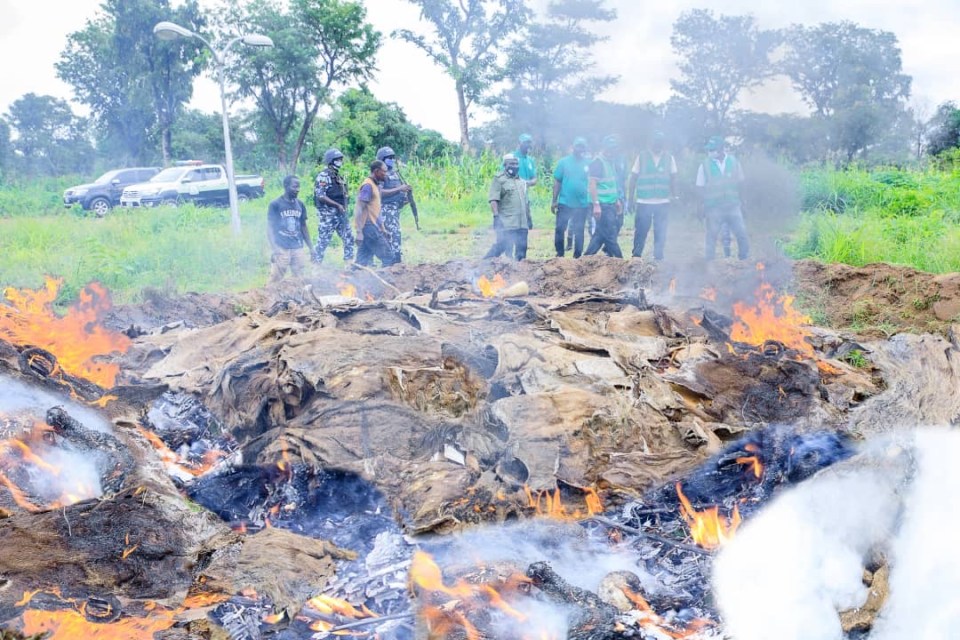 Head of media, communications and strategies of the Service, Dr Chigozie Nwodo, explained that NAQS seized the donkey skin during raids on underground donkey skin warehouses and slaughter camps across the country. It further clarified that the raids which were carried out with a detachment of men of the Nigerian Police from the Force Animal Branch (FAB), followed several unheeded warnings to the operators to shut down those warehouses and stop the decimation of Nigerian donkeys.

Speaking to newsmen at the event, the Coordinator of the Operations, Deputy Comptroller-General of Quarantine, Dr. Sunday Audu said that ”the volume of donkey skin we are destroying today bears witness to the fact that there is an insidious scorched earth war on Nigerian donkeys. This public destruction of the illegally processed export-bound donkey skin is meant to send a clear signal to all and sundry that the government will not countenance the overexploitation of Nigerian donkeys.”

Dr. Audu said that donkeys were an endangered species all over the world, informing that ”Nigeria is a signatory to the Convention on International Trade in Endangered Species. We are bound by our commitment to that protocol to protect endangered species.”

He added that Nigeria was ”one of the few standing bastions of donkeys on the planet. As such, the onus is on the country to ensure that its local donkey breeds don’t disappear from the face of the earth.”

He said that ”donkeys have a unique place in the human story and their existence ought to enjoy continuity in civilization. So we cannot be indifferent to the escalating threat of their overexploitation. Overexploitation will drive them to the brink of extinction. And we don’t want Nigerian donkeys to fade into oblivion like dinosaurs.”

Dr. Audu admonished stakeholders in the donkey value chain to do the business the right way and abide by NAQS regulations on the standard of acceptable conduct for actors in donkey-related businesses.

The Nigeria Agricultural Quarantine Service recently unveiled the principles of a blueprint to structure the donkey value chain. The blueprint lays out a model of donkey exploitation that is interwoven with the irreducible minimum of proportional restocking. The aim of the blueprint is to create a win-win climate of virtuous cycle of growth in which the donkeys live and thrive and serve as a dependable base for the sustainable prosperity of donkey businesses.

NAQS has affirmed on many platforms that the exploitation of the Nigerian donkeys has to be congruent with and subservient to the paramount imperative of restocking the national herd population. It also cautions that wherever NAQS catches a whiff of rogue tactics, its officers will be deployed to disrupt the activity and confiscate the products.